"Duality" is an Art|Sci manifestation of complexity emerging from a tiny network of billions of tiny self-assembled, self-organized, non-linear connections that materialize in time and space through holistic processes and which are a kinesthetic visualization of wandering in and out of the fuzzy borders of chaos and order. We use real networks, where the creator has given permission to its expanding and collapsing spatio-temporal morphogenic and often catastrophic dynamics.

This project represents the transition in science and art from giving up on the clock to embrace a cloud in terms of Karl Popper’s important statement, "We live in a universe not of clocks but of clouds". In the laboatory, we build electro-ionic clouds. In the gallery, we let them self-create images, songs, and dance for this Art|Sci exhibit entitled "Duality".

It is the duality of the dark space between the known and unknown, determinism and surprise, mathematical form and fuzziness from which the atoms, electrons, and ions speak to the visitors without censorship.

James K. Gimzewski is a Professor of Chemistry and Biochemistry at UCLA. His accomplishments include the first STM-manipulation of molecules at room temperature, the realization of molecular abacus using bucky balls, the discovery of single molecule rotors and the development of nanomechanical sensors based on nanotechnology, which explore the ultimate limits of sensitivity and measurement. His current interests within CNSI are in the nanoarchitectonics of molecular systems and molecular and biomolecular machines, in particular those with quantum mechanical possibilities for information processing. 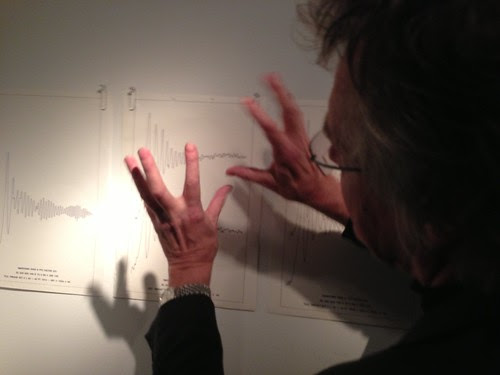 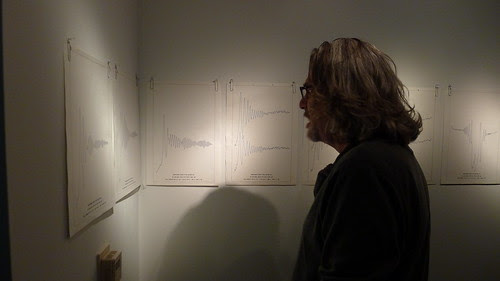 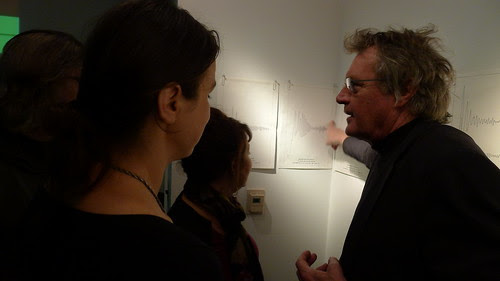 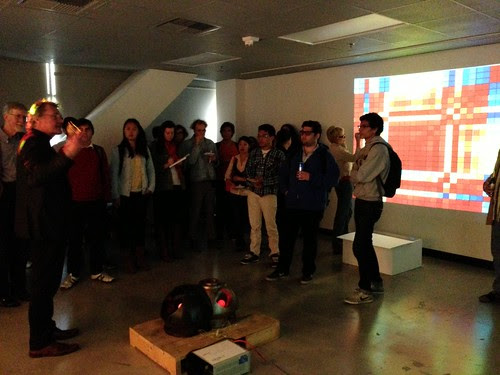 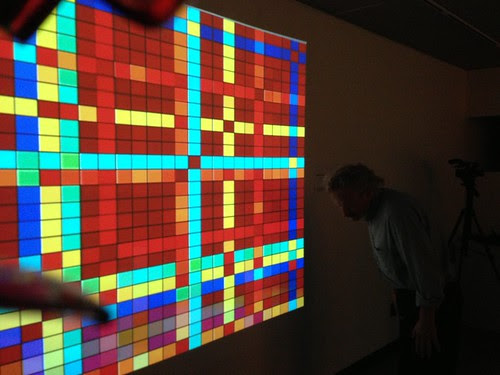 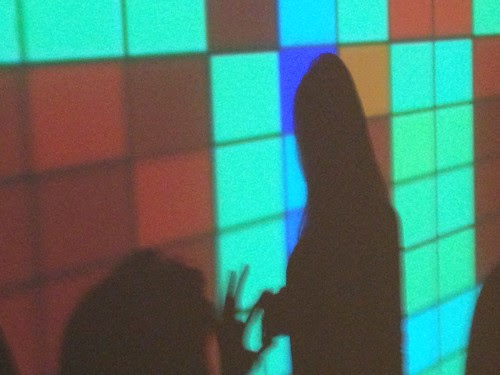 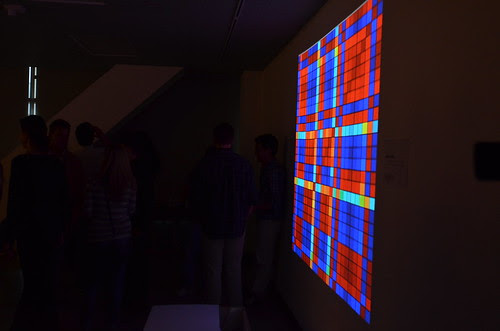 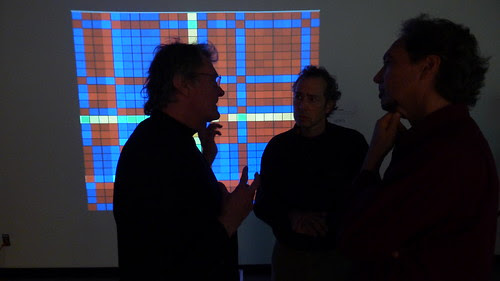 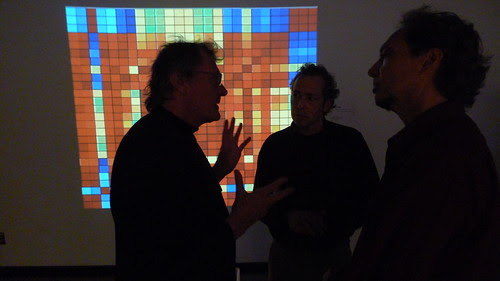 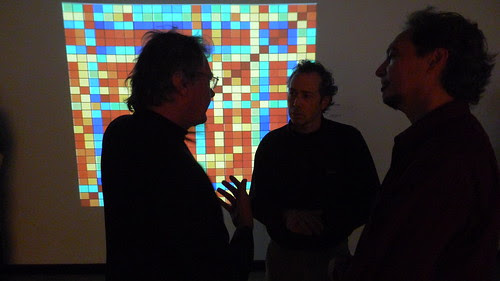 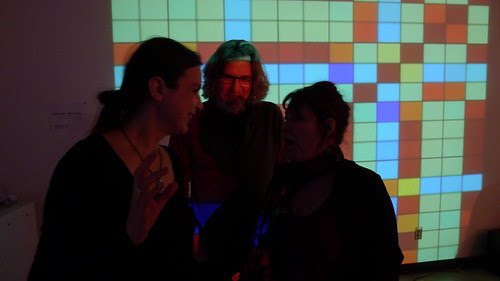 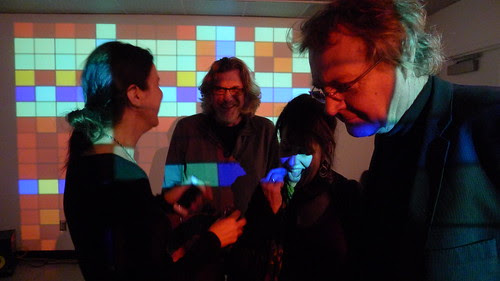 On April 2, 2013, President Obama announced the launch of the Brain Research through Advancing Innovative Neurotechnologies project or BRAIN and his intent to help “get this project off the ground” by proposing significant investment on this project by the National Institutes of Health (NIH), the National Science Foundation (NSF), and the Defense Advanced Research Projects Agency (DARPA) in the budget he will send to Congress next week. The new initiative will focus on developing and improving new technologies to better understand the human brain at both a basic level and at an applied level. The project builds on an early proposal published in Science and co-authored by UCLA’s Paul Weiss, Director of the California NanoSystems Institute, Fred Kavli Chair in NanoSystems Sciences, and a distinguished professor in the departments of chemistry and biochemistry and materials science and engineering, in which the program was called the Brain Activity Map (BAM) project.

"Top nanoscientists and neuroscientists have come together to see how the substantial investment and advances in nanoscience and nanotechnology can be used to measure the dynamic chemical and voltage signals in neural circuits." Weiss says. "This project will enable us to develop and to test new models to understand processes such as learning and memory. We may also be able to shed light on what causes neurological disorders when brains malfunction."

The brain is made up of an estimated 85 billion neurons connected at 100 trillion junctures called synapses that dynamically transmit signals in response to external or internal stimulation. Neurons communicate using both electrical signals, such as the movement of ions to create voltage gradients across cell membranes, and chemical signals, such as the release of neurotransmitters like serotonin that diffuse across synapses between neurons. Moreover, sets of neurons work together in networks or neural circuits to carry out different brain processes and to provide signaling feedback.

Understanding how these signals interact will likely depend on understanding neurons, not at the individual level, but at the circuit level. These circuits can involve as many as millions of individual neurons, making them extremely challenging to study.

This challenge is where the BRAIN Project comes in.

An interdisciplinary group of nanoscience and neuroscience researchers from around the country including Weiss; Anne Andrews, the Richard Metzner Endowed Chair in Clinical Neuropharmacology, a Professor in the departments of psychiatry and biobehavioral sciences and chemistry and biochemistry and member of CNSI and the Semel Institute for Neuroscience & Human Behavior; and Sotiris Masmanidis, Assistant Professor in the department of neurobiology and CNSI member, have been designing methods to create maps of brain activity that measure and probe the chemical and electrical signals involved in brain circuits.

"This work is what I came to UCLA to do,” says Masmanidis, an expert in the development of microscale neural probes, “to develop nanoscale tools to probe the network-level dynamics of the brain at small scales and high speeds. In order to do this, we have to make many simultaneous measurements beyond what is currently possible."

Unlike other attempts to map the static architectures of the brain—the framework of neurons and their connections—this effort will build on previous knowledge to focus on the dynamic signals that navigate through that framework. In an interview by io9, George Church, a professor in the department of genetics and the Wyss Institute at Harvard Medical School and co-author of the Science perspective, compared the difference to studying the distribution of a city’s telephone wires versus studying “where, when, and how those wires are transmitting messages.”

"The brain is a dynamic organ, a transducer between the body and the environment, and as such it is constantly changing. To measure and to understand the dynamics of the brain at a critical scale—looking simultaneously at the chemical, physical and neurophysiological interaction among many thousands of neurons—is a technically formidable challenge, for any perturbing analysis itself brings further dynamic change. But we are beginning to assemble the tools that can make such investigation possible and ultimately lead to better understanding of disease and its treatment," says Peter Whybrow, Director of the Semel Institute for Neuroscience and Human Behavior, Judson Braun Distinguished Professor and Executive Chair of the Department of Psychiatry and Biobehavioral Sciences, and Physician-in-Chief of the Stewart and Lynda Resnick Neuropsychiatric Hospital at UCLA. "[BRAIN] is the compelling project for the science of our time."

The project aims to provide valuable information that explains how actions, thoughts, and emotions are controlled by the brain and seeks to shed light on disorders such as Alzheimer’s disease, depression, and schizophrenia. Chemical and voltage activity maps could also enable scientists to develop new therapeutic drugs for such disorders.

"Understanding the interacting, dynamic chemistry of the brain is the key to understanding, and eventually treating, diseases such as anxiety and depression," says Andrews. "My group teamed up with nanoscientist Paul Weiss a decade ago in order to see how we might develop new tools to reach the smaller and faster time scales at which the action happens."

An article describing the current and possible future technologies for the project and how they will enable this endeavor was recently published in ACS Nano by over two dozen co-authors including Andrews, Masmanidis, Church, and Weiss, who is also the journal’s Editor-in-Chief.

"The idea is to accelerate, by decades, the development and application of technology to study the brain by bringing to bear the advances generated by the major U.S. and international investments in nanotechnology over the last decade," Weiss says.

Current technology is capable of measuring either the electrical activity of a small number of neurons at high resolution or of imaging the whole brain at relatively low-resolution, but tools capable of working between those two extremes—focused on neural circuits—are still in the early stages of development.

As described above, tiny probes are being designed that are capable of recording electrical signals over three-dimensional space within the brain. Novel optical tools are being combined with computational approaches to improve the precision of neural imaging while also increasing the numbers of neurons that can be visualized simultaneously. Wireless electronic circuits can be introduced into neuronal networks to measure activity and to affect signaling without requiring invasive surgery.

Additionally, the work of Weiss and Andrews has been focused on uncovering the relationships between neurotransmitters and their receptors, chemical interactions that have required the development of novel strategies that take advantage of cutting edge chemical patterning technology, which enables the researchers to precisely position receptors in a way that is optimized to identify their binding partners.

Experiments will depend on the ability to work at micrometer and nanometer scales that will enable the study of individual neural circuits, synapses between neurons, and neurotransmitter receptors.

Comparisons between the BRAIN project and the Human Genome Project have been drawn. The Human Genome Project, formally begun in 1990 and coordinated by the U.S. Department of Energy and the National Institutes of Health (NIH), energized researchers and catalyzed discussion leading to new areas of investigation. The main goals of the project were to identify all of the genes in human DNA and to determine the sequences of the 3 billion chemical base pairs that make up human DNA. Approximately $300 million per year was provided for the effort.

Likewise, BRAIN offers a new opportunity for collaboration among the NIH, the NSF, and DARPA, with room for participation from industry and foundations. If all goes well, the return from the BRAIN project will rival the return—estimated by some to be $140 for every $1 spent—coming from the Human Genome Project. The project will also create additional jobs for individuals trained in multiple fields and provide educational enrichment, both from a scientific standpoint and from a technology training standpoint. Ethical implications of the research will also be required, according to the White House.

"We have a chance to improve the lives of, not just millions, but billions of people on this planet through the research that’s done in this BRAIN initiative alone,” Obama said in his announcement. “But it’s going to require a serious effort, a sustained effort, and it’s going to require us as a country to embody and embrace that spirit of discovery that is what made America America."